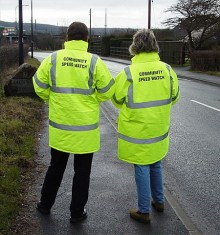 The local beat team have announced that a Community Speed Watch scheme is about to commence in Bradley Stoke.

The news was first revealed at last Tuesday’s Safer and Stronger Communities Group meeting and was confirmed today in an announcement on the police website.

The local police team have been looking to set up a scheme since at least June 2009 (we reported) and appealed once again for volunteers earlier this year.

The initiative has now been given the go-ahead after the requisite sixth volunteer came forward and scheme members will now be trained in the use of speed detection devices, after which they will be free to conduct speed checks around town.

Volunteers will record details of speeding vehicles and pass these to the police for action.

Any threats or intimidation towards the volunteers will be dealt with as a criminal matter, warn the police.

Anyone else interested in joining the Speed Watch is invited to get in touch with the local beat team.