A house fire in which two young boys died most likely started in a laundry basket, an inquest has heard.

McKenzie Whitton, aged seven, and Charlie Whitton, five, were killed in the blaze at their home in Bradley Stoke’s Merryweather Close in the early hours of Saturday 19th March 2011.

Assistant Deputy Coroner for Avon, Dr Simon Fox, said the fire was probably started by one of the boys, most likely McKenzie, playing with matches.

He returned a verdict of accidental death on each boy.

The inquest heard that the body of McKenzie was found in the upstairs bathroom and Charlie’s body was found in a bedroom.

Post-mortem examinations revealed they had died from the effects of smoke inhalation and carbon monoxide poisoning.

The boys’ parents, Alexandra and Lee Whitton, and brothers, Adam, Thomas and Jack, escaped the fire. Another brother, Matthew, was not at home at the time.

Dr Fox said two entirely separate investigations, by the fire service and an independent forensic scientist appointed by the police, had both concluded that the fire started in a laundry basket on the landing.

Recording his verdict, the coroner praised neighbours who had risked their lives trying to save the two boys.

In the weeks after last year’s tragic fire, the local community rallied round to support the Whitton family and neighbours of adjoining properties in Merryweather Close. A charity night at the BAWA ballroom in Filton raised over £2,000 and 11-year-old BSCS student Chloe Webster raised over £400 for the family through a sponsored run.

Stoke Lodge Primary School, attended by Charlie and McKenzie, collected money for a permanent memorial to be built in the school grounds and donations were also made to buy a present for surviving brother Thomas, also a pupil at the school. 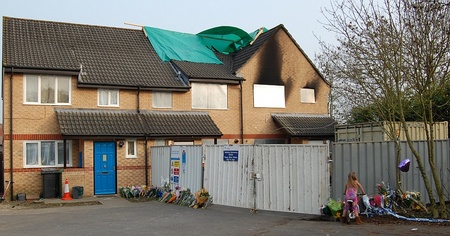 Photo: Aftermath of the tragic house fire in Merryweather Close.