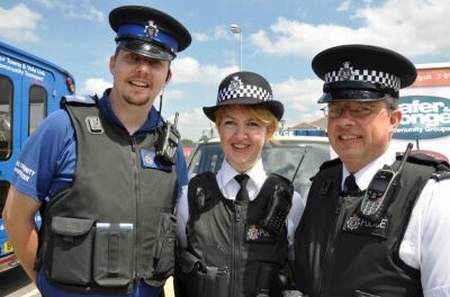 The police beat team in Bradley Stoke is currently two officers under strength due to a series of resignations within the Filton neighbourhood area.

For the last two years, the Bradley Stoke team has consisted of one full-time beat manager, one part-time-beat manager and three Police Community Support Officers (PCSOs).

But a series of resignations in the local team and those in the neighbouring beat areas of Patchway and Stoke Gifford means that the number of PCSOs covering Bradley Stoke has reduced from three to one.

PCSO Jason Green was re-deployed from Bradley Stoke to Stoke Gifford at the beginning of June, to plug gaps created by resignations and re-assignments in their beat team.

The vacancy in Stoke Gifford arose after one of their PCSOs decided to retrain as a police constable and a second was transferred to Patchway. Two PCSOs brought in to replace them have now both left the force after “deciding the role was not for them”, according to a message on the police website.

“Two PCSOs have recently left the Bradley Stoke neighbourhood team and we aim to fill these vacancies permanently as soon as possible.”

“One transferred to another area, while the second left the police service to take up another job opportunity. The neighbourhood is still covered by two PCs and a PCSO, supported by PCSOs from neighbouring beats.”

“Avon and Somerset Police runs a force-wide recruitment and training programme for PCSOs and we hope to fill the first vacancy from the recruits currently going through training. They are expected to be released to districts early next month, September.”

“We hope to be able to fill the second vacancy from the next available training programme.”

Speaking at last week’s Bradley Stoke Safer and Stronger Communities Group meeting, Beat Manager PC Steve Palmer said it was hoped that one replacement PCSO would be arriving “within three or four weeks”.

Funding for the Avon and Somerset police force comes from a levy added to Council Tax bills plus grants from Central Government.

However, two of the police officer position in Bradley Stoke are funded through additional local authority contributions, which has led to accusations by some Town Councillors that local taxpayers are “paying twice” for policing. The part-time beat manager post (currently held by WPC Claire Fletcher) is half-funded by Bradley Stoke Town Council and one of the PCSO positions (previously held by PCSO Paul Baxter) is paid for by South Gloucestershire Council.

Following the Coalition Government’s spending review in October 2010, police funding is set to be cut by 20% by 2014-15.

The Avon and Somerset Police Authority, which oversees the works of the police (although it is soon to be replaced by an elected Police Commissioner), claims that the local area is being underfunded by around £20m a year, thanks to a system which sees part of some forces’ Government grant redistributed to other areas.

The Police Authority recently conducted a public consultation on the “unfair” funding arrangements, the feedback from which will be presented to the Home Office in due course.