The Council had already decided that the Mayor should be involved in the official opening but a farcical debate at a Full Council meeting in August saw Councillors struggle to agree on which ‘celebrity’ (if any) should be invited to join her in declaring the building officially open.

The initial suggestion of Jack Lopresti received a cold reception from Ms Walker, who said she would prefer the ceremony to be “less grand” because “we don’t want people saying we’ve spent too much money on it”.

The Mayor’s brother, Cllr Ben Walker, who defected to UKIP earlier this year, also spoke out against inviting the MP, claiming that Mr Lopresti  “has failed to represent this community”.

Cllr Elaine Hardwick said it was important that the public were invited but Mr Walker poured scorn on the suggestion that they would want to attend.

Clearly wishing to avoid Mr Lopresti being involved at all costs, Cllr Ben Walker then suggested that the Chair of South Gloucestershire Council, Cllr Janet Biggin, should be invited to do the honour. Her involvement would ensure that the new office facility was mentioned in the District Council’s newsletter, which would be better than being mentioned in one of Mr Lopresti’s leaflets that would “just end up in the bin”.

“This is getting really silly. We know that Ben doesn’t like Jack Lopresti. Like it our not, he is our MP. If Jack was here tonight, he’d be disgusted with what’s going on.”

A suggestion that former Town Clerk David Chandler be asked to substitute for Mr Lopresti should the MP be unable to attend was withdrawn after it was pointed out by Cllr Sarah Pomfret that Mr Chandler had been against moving the Council office to the Jubilee Centre, preferring instead to have seen it at the Willow Brook Centre.

When it came to a vote, it was decided to invite Mr Lopresti – by six votes to two – with the Mayor and her brother voting against.

With no mention of today’s event on the Town Council’s website, it would appear that the wishes of some Councillors to see the public involved in the official opening have been quietly abandoned.

Responding to a query from The Journal, Town Clerk Sharon Petela said:

“Mr Lopresti has accepted the invitation.”

“A number of key stakeholders have been invited to a low-key opening ceremony at the office.” 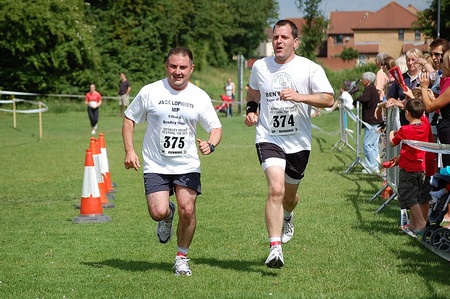 Photo: Happier times for Jack and Ben as the pair complete the 2010 Bradley Stoke 10k Run.