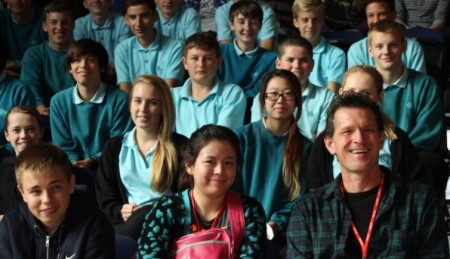 Students at Bradley Stoke Community School (BSCS) were captivated by entrepreneur Willie Harcourt-Cooze when he recently visited the school to tell the story of his life and his journey from dreams to business success.

Willie spoke of his childhood spent on a farm on a small island off the South West coast of Ireland and the hardships and joy they experienced living self-sufficiently. Willie was educated in England and Ireland, however after the death of his father and a nasty mugging at age 18 he found himself feeling “confused about the meaning of life”.

For several years after this he experimented with different jobs, but Willie failed to find his niche and so set off to travel across South America. This visit was the beginning of a love affair with Venezuela and cacao which would eventually lead to his success.

Willie evoked the beauty of the cacao farm that would begin his chocolate manufacturing career, describing the farm as “like magic” and “one of the most amazing places in the world”.

To Willie’s delight, the owner of the farm invited him to stay for a while. It was then that Willie first began experimenting with cacao perfecting the art of making hot chocolate. He described that, although a small moment, it was in fact “a life changing moment”.

After the collapse of the Venezuelan economy Willie returned to England. He emphasised to students throughout setbacks you need to have the passion and resilience to hold on to your dreams.

Willie publicised his journey to be the first chocolatier in Britain to make chocolate from the bean on Channel 4 Willie’s wonky chocolate factory and Chocolate Revolution: Raising the Bar. The publicity combined with a massive amount of hard work resulted in the Willie’s cacao taking off.

Everything from recruitment to managing VAT was sorted by Willie himself. The risks were massive on his behalf but this wasn’t going to stand in the way of his desires. He borrowed £10,000 from his mother and large amounts of money from the bank to send the business in the right direction and gain the publicity that his new business needed.

From there onwards Willie’s cacao market became increasingly big. He was soon travelling around the world distributing his products and doing talks. One of the students asked Willie about his international experiences in business, to which he spoke about the difficulties he experienced but highlighted the importance of looking for every opportunity and accepting that you won’t be successful every time. Amazed by the determination and resilience demonstrated by Willie, nearly every student found themselves thinking about what they could achieve.

When asked about his next steps, he revealed that the next big move would be a working chocolate factory open for visitors so that he could provide a unique, educational experience that will hopefully inspire people to understand more about real chocolate.

One A-Level business student, particularly inspired by Willie’s story, asked what advice he would give to somebody who wishes to one day be as successful, and received the answer “the best advice I could give is to dream big and then follow your dreams”.

After lots of intrigued students eagerly asking their questions, Willie ended by telling the students to “let your passion drive you” before giving each of them delicious cacao products to try themselves.

There is more information about the products, the recipes and Willie himself on http://williescacao.com if you find yourself intrigued, inspired or just wish to see the products.