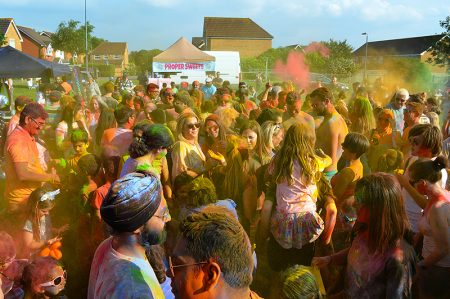 A report by the organisers.

SGAP had made elaborate preparations, with the help of its management committee, comprised entirely of volunteers. We had ordered colours, organised additional volunteers from the community to deal with the colours, worked with the council to produce health and safety instructions, publicised the event in the local media and on social media and produced a set of questions and answers (FAQs). And finally, a selection of the best dance music – Hollywood and Bollywood – was recorded and premixed.

On the day, the event organisers cordoned off an area around the dance stage to ensure that participation would be by choice and only within the designated area. The volunteers, 20 in total, were trained in the use of colours, a powder that is used for similar festivals across the world. Taking place at around 5.30pm, the event started off with a health and safety announcement – about the safe use of colours, our volunteers and the importance of remaining within the cordoned-off area. We started the music, and all of a sudden there were close to 250 people inside the cordon! We were pleasantly surprised. There was a cloud of vivid colours and people were dancing away to the foot-tapping music, which played non-stop for 20 minutes. People from the entire community joined in, adults and children (over 5 years) alike, helped by the fact that this was like a grand finale for the day and they wanted to use every second! People were unrecognisable with their faces and body “rainbowed” with colour.

The event went off smoothly, however, we were victims of our own success and did not anticipate this level of participation. The cordoned-off area proved to be inadequate and we felt we needed a bigger area and more volunteers. Also, next time we will insist on use of suitable sunglasses or distribute these at the event to ensure further safety.

We were funded by Bradley Stoke Town Council as part of its Small Grant scheme, and in addition we had a provider sponsor, Bubbleology, the well-known international bubble tea brand, with outlets in Bristol. We would like to sincerely thank the sponsors, the SGAP management committee and all the additional volunteers who helped on the day.

“This is the best example of community cohesion and participation that I have seen. We had the most enthusiastic crowd on the day, several of them approaching us to understand the cultural origins of this custom. The colours ran out, despite ordering vast quantities, and we had several people asking us not to stop! SGAP has been going strong for over 19 years now and our volunteers get great satisfaction from such events. Thanks are due to Bradley Stoke Town Council, which has always been a supporter of ours, and to those on our management committee, who despite full-time jobs and family commitments, pulled together to make this happen.”

So, until next year, when it will be bigger and better!

This article originally appeared in the July/August 2018 issue of the Bradley Stoke Journal news magazine (on page 26). The magazine is delivered FREE, EVERY MONTH, to ALL 8,700 homes in Bradley Stoke. Phone 01454 300 400 to enquire about advertising or leaflet insertion.