Tenders for the construction of a replacement skate park on a new site within the grounds of Bradley Stoke Leisure Centre could be sought within months after the project received the backing of South Gloucestershire Council’s (SGC’s) Policy and Resources Committee.

The future of the skate park had been in doubt after Circadian Trust, which runs the leisure centre on behalf of SGC, said there would be no space for it after an expansion of the centre that is planned to take place in 2015.

The skate park was originally designed to have a five year life, and the equipment is wearing out. However, Bradley Stoke Town Council (BSTC), which has responsibility for maintaining the park, has been reluctant to invest because of the uncertain future of the site.

A breakthrough was achieved earlier this year when Circadian agreed a new site for the skate park following talks with SGC and a working group of Bradley Stoke Town Council.

The new site is located close to the existing park, on an area of grass north of the overflow car park (see plan). It will be accessed from the footpath off Fiddlers Wood Lane, thereby addressing Circadian’s concerns about children’s safety within the leisure centre car park (there have been three recorded accidents in recent years).

The young people who use the park have aspirations for its replacement to be constructed predominately from concrete and would like to see at least part of it covered with a “roof”, so that they can continue to use it when it rains.

Graham Baker, BSTC’s Youth Participation Worker, has already been in contact with four skate park construction companies (1Skateparks, Wheelscape, Maverick and Gravity) and some of them have already visited the new site to assess it and discuss potential layouts with the users.

Mr Baker told last month’s meeting of the BSTC Leisure, Youth and Amenities Committee that initial discussions had indicated the need for an additional 5 metre strip of land in order to accommodate a medium sized park that would meet young people’s aspirations and the possibility of obtaining this will now be discussed with SGC and Circadian.

BSTC has initially agreed to spend up to £2,850 to cover the cost of a geotechnical survey of the site and obtaining pre-planning application advice from SGC. It is hoped that money from SGC’s New Homes Bonus fund can be used to help cover the construction costs.

“The existing skate park has served local young people well over the years, but the equipment is wearing out and so we need to help secure better facilities.”

“Once resolved, this could be a major win-win for Bradley Stoke – a flagship new skate park on a new site to serve local youngsters, thus freeing up the space needed to create extra capacity at the leisure centre so it’s less crowded for existing and future users.”

If you are a young person living in Bradley Stoke aged 11 to 19 who would like to find out more or get involved, please contact Graham Baker on 07900 253826. 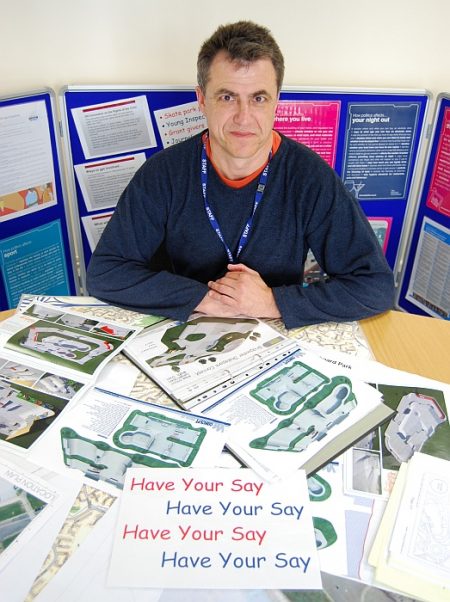 This article originally appeared in the November edition of the Bradley Stoke Journal magazine, delivered FREE, EVERY MONTH, to all homes in Bradley Stoke.