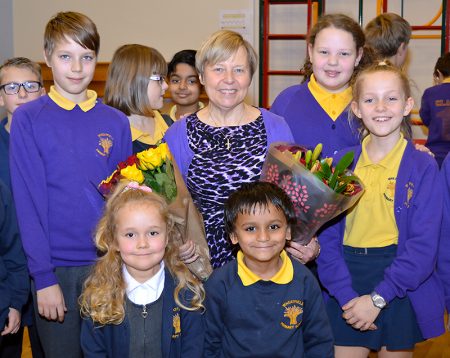 Bradley Stoke’s longest-serving headteacher has retired after being in charge of Wheatfield Primary School for 18 years.

Christine Dursley, who has led the school since it first opened in 1998, was given emotional send-offs by governors, parents, staff and pupils at a series of functions held during the final week of the autumn term.

Miss Dursley had announced her intention to resign from her post in a letter sent to parents in early October, at a time when she was absent from school due to ill health. She was subsequently able to return to work on a phased and part-time basis from the beginning of November.

In her letter to parents, she wrote: “It has been a huge privilege and honour to be head of Wheatfield for over 18 years and to watch the school grow from its small beginnings and develop into the happy, diverse, thriving and successful learning community it is today.”

“During that time, I have worked with amazingly talented staff and governors, who have tirelessly endeavoured to make a difference for the many children, including yours, who have walked through our doors.”

“I cannot adequately describe how much I will miss being a part of the very large family, which is Wheatfield! I will especially miss our wonderful children, who each and every day, have never failed to make me proud, ‘warm’ my heart and bring many a smile to my face, but feel that now is the right time to leave!”

Speaking at a retirement party held on Monday 12th December, Sue Davey, chair of governors, said she had calculated that a total of 1,360 children had passed through the school since it opened in 1998.

“This is your school, you ARE Wheatfield and it will be a very different place without you. But, due to your energy, commitment and determination, you leave Wheatfield in a very strong position from where it can travel into the future with confidence and assured success. For this we are very grateful.”

Pupils gave Miss Dursley their own send-off at a special assembly held on Thursday 15th December (see photos above and below; more on Flickr).

Asked about plans for her retirement, Miss Dursley said she will be taking it easy for a while as she is still recovering from illness. Once returned to full health, she hopes to enjoy a few holidays and will “probably end up doing some volunteering”, particularly at her local church, where she is already very involved. 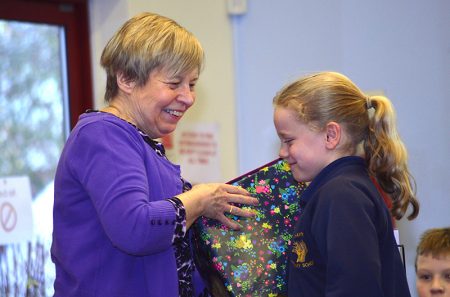 This article originally appeared in the January 2017 edition of the Bradley Stoke Journal news magazine (on page 24). The magazine is delivered FREE, EVERY MONTH, to 9,500 homes in Bradley Stoke, Little Stoke and Stoke Lodge. Phone 01454 300 400 to enquire about advertising or leaflet insertion.