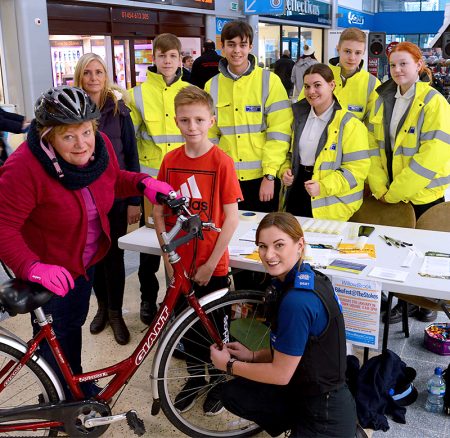 Bradley Stoke resident Josh Harding, 14, chose to “make something positive out of a negative” after his bike was stolen last September. Here he reports on the success of the ‘bike security & safe cycling’ event that he organised, at which over 250 bikes were security marked…

After three months’ preparation, the day of the bike event, 6th January, finally arrived, bringing with it overnight freezing temperatures. The decision was quickly made to move the event inside the Willow Brook Centre to avoid everyone involved feeling the force of nature. With much anticipation, the volunteers, from the different organisations who agreed to attend, began to arrive and set up. By 10.50am everything was ready, but the nerves were setting in. However, at 11am, I looked up and saw a stream of people, with bikes, heading towards us. I was so relieved and thought then, this event is going to be a success! I jumped on the static bike to start the static cycle challenge for Life Cycle UK and chatted to people around me. PCSO Alicia Harvey and members of the Patchway police cadets started the mammoth task of security marking the bikes. Community champion Dawn, from Tesco, started handing out smoothies, whilst encouraging people, old and young, to have a go on the smoothie bike.

Wanting to be sure that no one missed the event, due to the relocation, Andy from Bradley Stoke Radio began making announcements and people just kept coming – it was fab! Andrea and Stuart, from the South Glos Bikeability Team, were busy receiving donated bikes and making small adjustments to any bike that needed them, while Keith from SportsPound chatted to people and handed out SportsPound vouchers.

Before I knew it, two hours had passed and my legs were beginning to ache. Mum, other family members and friends took over for a short period to give me a break. I jumped back on the bike, after helping to hand out smoothies, as I wanted to raise as much money as I could for our chosen charity, Life Cycle UK. Time flew by and people kept coming! It was wonderful to see so many families, all with bikes, coming along to reduce the chance of having their bike stolen. People were even approaching my mum and offering to donate a bike or even buy me a new one, to thank me for organising the event. I was really touched by their offers but Mum politely declined.

As the event came to an end at 3pm, the police cadets had security marked over 250 bikes, 15 bikes had been donated to the South Glos Bike Recycling Scheme and we had raised £110 for Life Cycle UK. I never imagined so much support and community spirit was possible. I was devastated when my bike was stolen but this event gave me something positive to focus on. I met some amazing people and I am very proud of what was achieved.

However, without the support of the following, the event would never have been possible, so special thanks to:

And finally, thanks to my mum for all her help and support (sorry about the sleepless nights!) You showed me how to turn a negative situation around and helped restore my faith in people. The only downfall to the event was that I walked like John Wayne the next day after being on the static cycle so long but it was so worth it!

Thanks again to you all!

Bike thefts recorded in the final two weeks of 2017

This article originally appeared in the February 2018 issue of the Bradley Stoke Journal news magazine (on pages 20 & 21). The magazine is delivered FREE, EVERY MONTH, to 9,500 homes in Bradley Stoke, Little Stoke and Stoke Lodge. Phone 01454 300 400 to enquire about advertising or leaflet insertion.