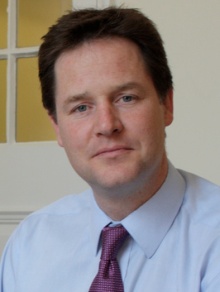 A visit by Deputy Prime Minister Nick Clegg to Bradley Stoke planned for today has had to be cancelled “for operational reasons”, according to a Liberal Democrat spokesperson.

The visit first came to light on BBC Radio Bristol news bulletins this morning (Friday 8th), where it was announced that:

“The Deputy Prime Minister Nick Clegg is to make a flying visit to the West Country today. The Liberal Democrat leader will be in Bradley Stoke to answer questions from the public in what his party calls a Town Hall-style meeting.”

However, on contacting a local Lib Dem source, The Journal was told that the visit had been cancelled on security grounds because the BBC “shouldn’t have announced it”.

Further investigation by The Journal revealed that the meeting was to have taken place at Bradley Stoke Community School (BSCS).

BSCS headteacher Dave Baker later confirmed that Mr Clegg  had been expected but that the meeting had been postponed because of “concerns about the local elections and purdah – nothing to do with security”.

Liz Peplow, a regional Lib Dem spokesperson, later told The Journal that the visit had been postponed “for operational reasons” and that the BBC had been informed of this on Thursday night.

Dave Baker said the school has been told that Mr Clegg would like to re-schedule the visit after the local elections that take place on 5th May.