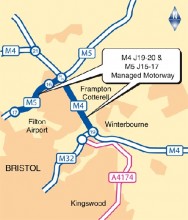 A public exhibition is being held this week to display the latest information about plans to allow vehicles to use the hard shoulder on motorways in the Bradley Stoke area.

Work on the M4/M5 Managed Motorway scheme, announced by Geoff Hoon, Secretary of State for Transport, earlier this year, is due to begin in Spring 2010 and be fully operational in 2012.

The project aims to ease congestion on the busiest parts of Bristol’s motorway network and will see drivers being able to use the hard shoulder as an extra lane during peak hours.

A similar scheme is already in operation on an eleven mile stretch of the M42 south of Birmingham. The speed limit for all lanes is reduced to 50mph when the hard shoulder is in use, while a red cross on signs over the hard shoulder tells drivers when the lane is closed.

Representatives of the Highways Agency and their consultants will be at the exhibition to answer any questions.