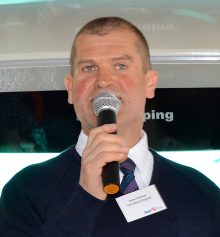 James Freeman, managing director of First Bristol, is expected to attend a public council meeting in Bradley Stoke on Wednesday evening (22nd August), at which he will face questions about the future of the 73 and X73 services once MetroBus begins serving the town.

Currently planned to start operating in January 2019, the M1 MetroBus route will link The Mall at Cribbs Causeway with Bristol city centre and parts of south Bristol. Buses on the route will travel along Bradley Stoke Way and use the recently opened Stoke Gifford By-Pass and the M32 (via a new bus-only junction at Stoke Lane).

MetroBus has previously stated that, during the initial phase of operation, it expects that 90 percent of passengers on its services will have transferred from existing routes, leading to concerns over the future of some of them.

First has been coy about its future plans for its 73 and X73 services, but gave some hints following the announcement, back in April, of Bristol Community Transport as the operator for the MetroBus M1 service (albeit under contract to First).

At that time, a First spokesperson told the Journal:

“The current plan is to run a slightly modified version of the current 73 while the M1 ‘beds in’. The X73 will be withdrawn because it would not be commercially viable once service M1 starts.”

Journal readers have expressed concerns about a possible reduction in the 73 service, pointing out that it provides important connections to places like Bristol Parkway, the MoD, Filton and Gloucester Road, all of which will not be served by MetroBus. The 73 route also serves parts of the town which are some distance from Bradley Stoke Way, so will still provide an important service for residents who have difficulty reaching the new MetroBus stops.

Wednesday’s meeting of Bradley Stoke Town Council’s Planning & Environment Committee takes place at the Jubilee Centre, Savages Wood Road (BS32 8HL), starting at 7pm. As with all town council meetings, local residents will be permitted to ask questions at the start of proceedings.